The earliest Maypoles were part of a celebration of Summer which would be linked in with mystical things like tree worship and more basic things like an excuse for dancing and having a good time. They were probably just simple trees cut down and re-erected in the centre of a village green. We know that by the 16th and 17th centuries they were often very tall as we have paintings showing people dancing around them and the Puritans, who hated them, described in great detail what they were destroying, although the actual dances were not recorded.
Maypole at Greenwich

After the Restoration many Maypoles were re-instated and a notable one was in the Strand. This was 134 foot high (41m) and stood there until Sir Isaac Newton used parts of it as a base for his telescope! Some of the maypoles from that period still survive in villages around the country. None of these maypoles had ribbons so the dances were probably any circular dances that were popular at the time

The Maypole Dancing that everyone knows about happened because John Ruskin introduced it at Whitelands College in 1881 and he created a series of dances and a May Pageant and generations of teachers learnt all about these and took them wherever they went on to teach and by the middle of the 20th century it had become a major tradition, much of which survives to the present day but for some years had been dying out as fewer teachers knew the dances.

Fortunately over the last few years Maypole Dancing has had a bit of a revival for all sorts of reasons to do with a greater awareness of our own culture and the sheer enjoyment by dancers and audience alike. The difference now is that there is a far greater degree of creativity with new dances and styles being invented all the time.

In the early days the music would have been played on instruments like the Pipe & Tabor or the English Bagpipes and we can see these in those early paintings. By the time John Ruskin came along the concertina or the fiddle would have been added and then later instruments would have included the accordion, flutes or any instruments that were loud enough to work in the open air. That still hold true but now often people dance to recorded music, whether recordings of country dance music and instruments like those mentioned or even pop songs and rap. 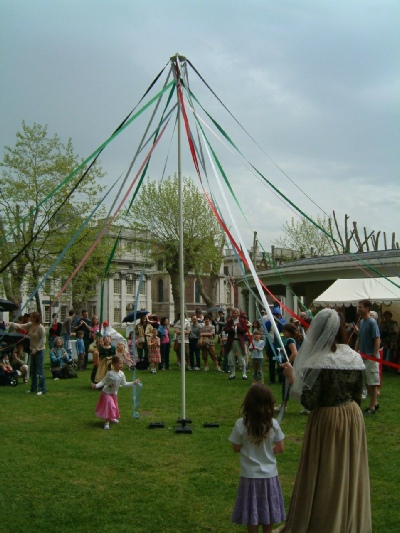 Originally children would have worn their best clothes. By the time we reached Victorian times there was a deliberate attempt to re-create an image of “Merrie England” (which never really existed) and so costumes would have been chosen to reflect that.

Nowadays anything goes. There are Tudor Peasants, Victorian Gentlemen & Ladies, Medieval Costumes which can be quite grand, Sports Kit, Simple variations on school uniform or just sashes to identify dancers from spectators.

While Maypoles are regarded as something very English they exist in many other parts of the world , although sometimes in slightly different forms. We have already mentioned Germany & France. There are traditions in Galicia (in Spain), Finland & Mexico. We have come across people who learned Maypole Dancing 60 or more years ago in Jamaica and Trinidad. Last year I was also told about a tradition in Iran.