A travelling minstrel does not always refer to a chocolate sweet that’s disappeared down the back of the sofa. Sometimes they get lost in orbit around the galaxy (bar) or in other such chocolate related punchlines.

Thankfully Mike sticks mainly to singing and playing the recorder, octave mandola and drum and only rarely travels into space. He can work on his own, with lutenist Chris Goodwin, or with singer and instrumentalist Tamsyn Rose-Steel as the duo Bag o’Peas.
Mike & Tamsin

Bag o’Peas CD is finally released under the name of 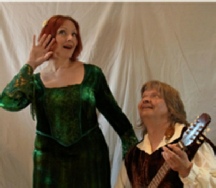 Featuring Tamsyn Rose-Steel on vocals, viola and percussion, Mike on recorders, vocals, mandola and percussion with Chris Goodwin on lute and Andy Dewar providing additional percussion. 9 tracks from authentic medieval, through instrumentals and well known favourites to a couple of folk songs.

Available from Mike (or Tamsyn) for £10 including p&p

Click below to listen to tracks from the CD: 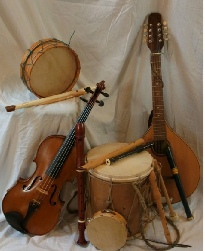 Null Nomine Daunce has rifled through the archives to bring to life medieval notation and faded illustrations, performing music and dance from the Middle Ages to the 17th century.

Authentic material is dusted off, given a lick of paint and made accessible to all ages and abilities.

Events are ideal for re-enactment groups, historical venues or just something different. Shows combine all the fun of a traditional ceilidh with the romance of history.

Specialist workshops can be provided for those who want to practise beforehand and a demo CD is available.